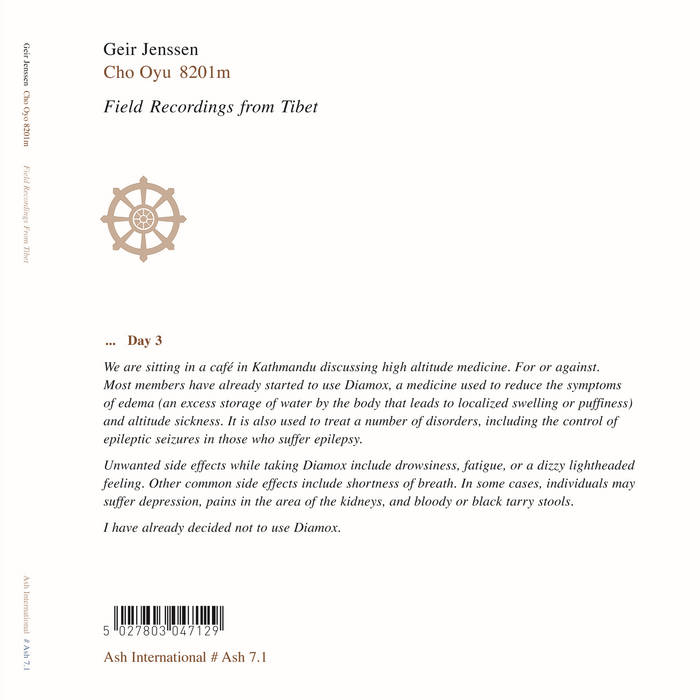 These recordings were made by Geir Jenssen [aka ‘Biosphere’] while climbing ‘Cho Oyu’ in Tibet in September and October 2001. Cho Oyu is the sixth highest mountain in the world at 8201m, situated in the Himalayas near Mount Everest, on the Tibetan/Nepalese border. This album may be regarded as the soundtrack to the film of this journey. This CD also contains some of the source material for his Biosphere album, Dropsonde [Touch 2006].

The approaching journey, with six climbers and one sherpa, was made from Katmandu into Tibet, taking one week to reach Basecamp. This period also included acclimatisation, which involves stopping at regular intervals for training for height climbing: "climb high, sleep low", they say. Once at Basecamp, climbing commences at once involving the same process. Equipment would be left at Camp 1, then the climbers would return to Basecamp to sleep. This reduces the likelihood of altitude sickness, which is caused by too speedy an ascent.

The weather at Basecamp was good - it was below the snowline at 5700m. Cold at night, of course, dry but with changeable wind conditions. There is no vegetation at this point and no human habitation. But some bold Tibetans established a 'tea shop' in a green military tent to sell Chinese beers, cigarettes, soft drinks and so on to the mountaineers. They preferred Dollars to Yuan.

Aside from the usual mountaineering equipment, the group had a satellite telephone and could email through the link. Geir sent an email to Mike from Basecamp using this method. An oxygen cylinder, costing $250, was taken with the party in the event of an emergency. It remained unused. A PAC [portable altitude chamber, used in the event of altitude sickness], powered with a foot pump, was also unused on the journey. But tragedy struck at Basecamp, when a South Korean died of pulmonary edema as a result of altitude sickness. He was the expedition leader for a separate group, but he refused to go down the mountain when he became sick and died after a week's illness. Geir also took a shortwave radio with him and could clearly hear the BBC World Service news broadcasts. Every group also had walkie talkies with them, which worked over most distances, but could sometimes be a problem if batteries ran down or got too cold.

The first track, 'Zhangmu: Crossing A Landslide Area', was made just after you crossed the border into Tibet, over 'Friendship Bridge' from Nepal. Using a minidisc recorder and a Sony mic, Geir recorded his walk over an area devastated by a landslide, which had taken place on September 10th 2001. On his shortwave radio he heard details of the attack on the World Trade Center in New York City. There was music everywhere, blasting out of cars and portable CD players.

'Tingri: The Last Truck' was recorded on the road from Tingri to Beijing. Tingri was the last inhabited area before the mountain. Trucks zoomed past livestock; horses and carts, pigs, yaks were overtaken by vehicles blasting their horns to clear the road. Tingri to the Chinese control base by car took a few hours. There, Tibetan refugees were observed by the Chinese military. The group were processed by the border guards; minimum paperwork, friendly officials, and a bowl of soup. From there to Basecamp took three days walk; the road ended at this point, so yaks carried all their tents, food, climbing gear and so on. 'Jobo Rabzang' is a mountain, under 7000m, and gives the title to a piece sampled and processed from a cassette of Tibetan music.

Wind, yak bells and ambient sound provide the material for 'Chinese Basecamp: Near A Stone Shelter'. It was very windy and the first experience of the elements at their rawest. It was also cold, so there was a high wind-chill factor. At night his breath froze. 'Palung: A Yak Caravan Is Coming' was recorded in open territory: a beautiful, still morning but quite cold. Geir developed a serious headache because the day before the group had got lost and had to retrace their steps to find Palung. They had to walk very fast to arrive before dark and so they got headaches from burning up too much energy too quickly.

It took two days to arrive at Basecamp. They were exhausted on their arrival, still plagued by headaches. The morning, Geir felt much better after a good night's sleep, and before breakfast he recorded track 6, 'Cho Oyu Basecamp: Morning'. The mic was positioned outside his tent, Geir was in his tent listening to what was being recorded on headphones. Some sherpas were making breakfast. Ravens, crows and pigeons circled the area looking for food. Basecamp was a collection of tents placed in gaps in the morain; at 5700m, it was surprisingly warm in the sun, and a tiny stream provided fresh water. If the weather turned bad, wind, cold and snow drove them back into their tents where they could only sit and wait for conditions to improve.

The view from Basecamp was extraordinary: in the distance you could make out yak caravans and Tibetan refugees on the main pass ('Nangpa La') to Nepal. A huge glacier dominated the foreground, with the Himalayas forming the backdrop. At night Geir could hear refugees creeping past in their attempts to evade the Chinese military, who were on the constant lookout.

Basecamp to Camp 1 took over six hours on the first day, and most of the equipment was carried to Camp 1 on the first trip. The climbers then returned to Basecamp to sleep. The rule of "climb high, sleep low" was followed, although not strictly adhered to, all the way up the mountain.

Geir wanted to get some clean recordings of the birds, so he asked the sherpa how he could do this. The sherpa suggested he take some biscuits and rice and walk to one of the in the area. He placed the food on a rock and the microphone five centimetres away. He pushed the record button and left. 'Nangpa La: Birds Feeding On Biscuits' is a clean, unprocessed extract from that recording.

Each night at around 1am Geir could hear, on a certain shortwave frequency the pilots' chatter from planes over the Himalayas. One of the pilots mentions 'Bombay', or 'Mumbai'. 'Camp 1: Himalayan Nightflight' is the untreated result. His first attempt, however, went unrecorded as the cable from the radio to the minidisc slipped out in his sleeping bag. However, at exactly the same time the following night he was able to make a similar recording.

Camp 1, 6100m, to Camp 1.5, 6600m, took 4 or 5 hours of hard walking, including an ascent up an icefall. Geir made the journey alone, because the other climbers were sick or deterred by bad weather. 'Camp 1.5: Mountain Upon Mountain', or 'Blåne etterr Blåne' in the original Norwegian, is by Eivind Groven, who composed Radio Norway International's theme tune. This tune, found on XXXHz, is no longer transmitted, but Geir found it nostalgic to hear this familiar melody. Now it is only to be found on NRK internet radio. Geir slept alone for the first time on the mountain and he could hear bad weather roaring on the summit. Exhiliarated by this experience, perfect weather greeted him the next morning. Geir pushed on straight to Camp 2, which took 5 or 6 hours. A gas stove provided hot food and water from melted snow. Climbers are advised to drink 5 litres per day and many hours were taken up melting the snow. Slept at Camp 2, then retraced his steps all the way back to Basecamp for 3 days rest. Returning to Camp 2, Geir recorded 'Camp 2: World Music On The Radio', randomly tuning his set. This extract features music from South Central Asia. He liked the atmosphere the music created at night, sitting alone in his tent.

Geir waited for two others to arrive at Camp 2, and together they climbed to Camp 3, 7400m, a shorter journey. 'Camp 3: Neighbours On Oxygen' was made when the wind picked up and ferocious hail hit the tents. A group chose to wear oxygen masks and could easily be heard from Geir's tent, where he made this recording. It is quite normal to 'sleep on oxygen' at these altitudes.

The next day, starting at 3am, they proceeded to the summit. Geir, a sherpa and an Englishman climbed together. The Englishman turned back by the 'rock bands', suffering from frostbite. Geir and Krishna Bahadur Tamang continued to the summit. -30ºC, bright, still, probably the best day of the season. As they approached the summit, Geir was hallucinating from lack of oxygen; the colours seemed to change and the snow appeared to float and change into welcoming and very comfortable sofas...

The journey down was fantastic, but hard. Happy to have reached the summit. The weather turned nasty from Camp 3. Geir luckily decided to continue to Camp 2 immediately, and that night he could see the tents on Camp 3 ripped apart by the wind. The journey back to Basecamp took 2 days, but the wind never relented. He rested there for 2 more days, eating as much as he could do restore his bodyweight. At night he woke up regularly, gasping for air under the impression he was suffocating.

Back to Katmandu, Italian restaurants, pizzas and pasta, Cappucino and icecream. The whole trip took 45 days. He is uncertain whether he would undertake a similar journey; once was enough.

Design by Jon Wozencroft
Edited by Touch
Mastered by Denis Blackham
Other [Map Of Tingri Courtesy Of] – www.tibetmap.com
Photography by Geir Jenssen

In over-sized gatefold wallet (17cm x 14cm) containing the CD in lightweight plain white paper sleeve and the booklet "Only Krishna And I - With Adventure Peaks To Cho Oyu".

Track 9 is a shortwave recording of "Blåne etter blåne", the theme tune of Radio Norway International. The title of track 9 is the English translation of the original title.