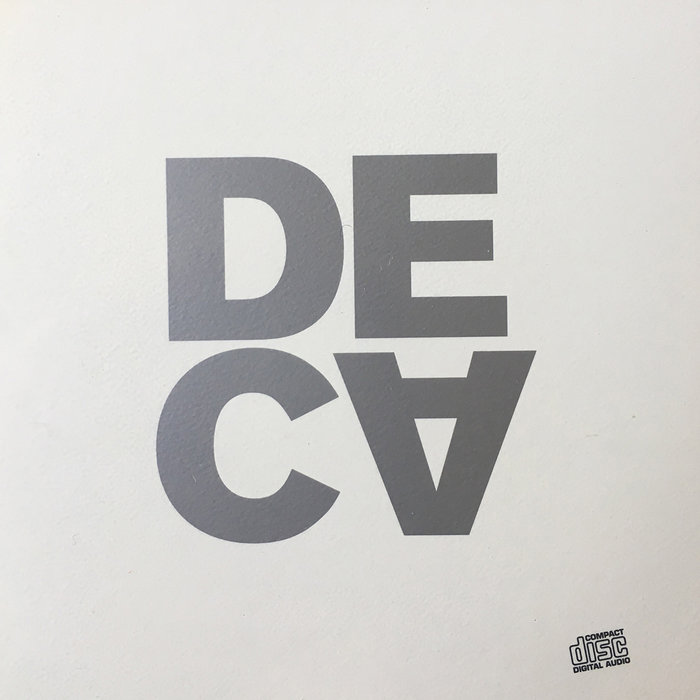 Part three of the triptych which began with chiky(u)u and followed with scatter.

Decay is (possibly ?) the final part of the triptych which began with the outstanding 'Chiky(u)u', a collection from Japanese contributors. This was followed by 'Scatter', an American anthology and now 'Decay' which was assembled from works by European composers. Entomologist, ant-expert and Spaniard Franky Lopez starts this CD...a captured orchestra struggles out from under the hard-wired crickets only to be washed back by a wave of noise. Put Put's unabashed hi-octane jets of air stress the gaskets, slice like invisible knives. There's extreme oddness as voice punctuates pulse in Graham Lewis' 'I Saved M.I.T.(Yes I Did)'. A clutch of compositions from newcomers Hecker - a conversation between a turntable, an old fridge and radio - AER - outside now, birds, a glorious storm, a dropout - and Anton Nikkila. Shirt Trax put the hurts on their agonized machines, forcing them to do wrong things. Then guitarist Fennesz (see latest on Mego) heats up his axe till it blisters...still there's room for delay. And finally Noto(also availible on Raster Music) who bops to sine.And now, sadly, time to confirm that this is the final release on Ash (Wot?! No fourth part to the trilogy, then ?) . I, for one, have had a load of listening pleasure whilst learning a lot about shaping sound from severalmany of the releases on this peerless label. Hopefully the vast space it's absence will create will be filled by something equally challenging; something which continues to lead the few in their pursuit of the original."

"Sadly the last release for ash international ("from here on it can only get worse"), mike harding and robin "scanner" rimbaud call it quit and will concentrate on the touch label (from which we also received an awesome vainio (from panasonic) ep this week). decay is also the last in three compilations featuring electroacoustic and experimental artists from all over the world. after chiky(u)u and japan, scatter and america comes decay and europe... listen to fennesz (from which we also got a cd on mego this week, thanks a lot arthur!), fancisco lopez, put put and a lot of people i had never heard about..."

"Investigate this Trilogy or Triptych of compilations as soon as possible. A tripartite electronic and field recording international survey, mostly new artists from (respectively) Japan, America and Europe...all extremely strange and worrying sounds, and even if you like droning Ambient noise you may find some of it a bit too far-out for your tastes. As a listener, you've got to do some of the work yourself. Little of it is actually 'musical' at all, deriving from other sound sources. The project almost comes across like an antidote to music.

But out final stage is the most pessimistic, Decay - the ultimate end of our harvest kept too long in the grain silo. No joyous hymns about bringing in the sheaves here, brothers. A finality underscored by the fact that this is the last-ever Ash International Release, and official release date tallies with Armistice Day. The manna from heaven should be eaten and enjoyed today, while you still can (Exodus, Ch 16). This CD is still being investigated in the Second Projector house; it gave me nightmares the night after its arrival. A selection of extreme and unsettling sound artists from Europe, of which the unremitting loop structure of 'I Saved M.I.T. (Yes I Did)' leaves you with one of the most indelible stains in the brain. Decay is DARK, the so-called dark-Ambient comp Narcosis is a bright August day in comparison...the trilogy turns into a Hieronoymous (sic) Bosch triptych, most probably The Garden of Earthly Delights. Chiky(u)u is the Japanese 'Heaven' of the triptych's left wing, on the right it's clearly the 'musical hell' delineated by Decay...but what can Scatter tell us about the state of world today? Listen and learn...it's not a palatable message."

"...Lewis is also found on the Ash International compilation Decay; it is the final part of a trilogy that surveyed the world's experimental/electronic underground. Part one, Chiky(u)u, featured artists from Japan; part two, Scatter , was Americans; and now Decay showcases contributors from Europe. Alongside the higher profile artists, Lewis and tech-step junglist Panacea, are well-known experimenters such as Spain's Francisco Lopez (who has releases on The Table of the Elements and Trente Oiseaux labels), and emerging ones from the electronica scene, Austria's Christian Fennesz (mego) and East Germany's Noto, (who has worked worked with Panasonic). Lewis's motoric rhythm and voice loop piece "I Saved M.I.T. (Yes I Did)" is probably the most accessible piece on this collection, which is all about abstractions of noise. As the architectural shell of European culture decays, the extension of our nervous system into digital electronics; and ultimately a global brain, is the new unseen landscape. Decay is all about this change inward and the sound ramifications of digital communications. In pursuit of these sounds, Touch has launched the OR label [no it hasn't - Ed.] to succeed the Ash International imprint, which sadly ends with this release." (Chris Twomey)

Sleevenotes: "This release is the second part in a tryptich... Chiky(u)u, Scatter, Decay."
The original CD was packaged in a soft plastic gatefold sleeve with color inserts.